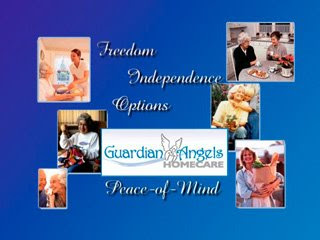 Friday was another good day. A new project. This time video. VIP Studios provided video taping for a home care company called Guardian Angels Home Care in regard to new employees. The business owner called me a few months ago and asked if VIP Studios could help her produce a video for employee orientation. I said yes, and when she was ready, we could start the project rolling. She called back and we set a date and time for March 28th. I showed up on time and shooting started at 12:30 PM. There were three parts to cover. Part one was Pat introducing herself and welcoming the new hire to the family of caregivers, part two was Kim giving the orientation, the process of doing the correct procedures expected by the the new hire, plus Q & A or frequently asked questions. Part three was Jessica doing a segment on Living with Dementia. The shoot lasted about two and one half hours, everything went well and I was very pleased with how prepared the company was. Definitely a good company to be involved with either for home care or for employment. I really like the way the company respects and treats you. They would be happily devoted as your Guardian Angel and it shows. Now comes the editing portion of the project. I will make sure this video exceeds their expectations. It would be well worth the effort.
Posted by VIP Studios at 9:16 PM

VIP Studios
I am a strong believer in The Law of Attraction.

I am a professional photographer. Owner of VIP Studios located in Waterbury Connecticut. My photo shoots are detailed to the clients' needs. I certainly love photographing so there are no limitations to the work that I will do. I find every project enjoyable. TFP, Paid Assignments, Private Sessions, Travel, Out of State are all welcome!!! Please inquire.

Also, I am a Professional Videographer. My video acquisition work concentrates on jobs for Law Firms and Corporate video shoots.

Contact me to inquire on how to create a Buzz!

Note: I am currently looking for a female photographers assistant.