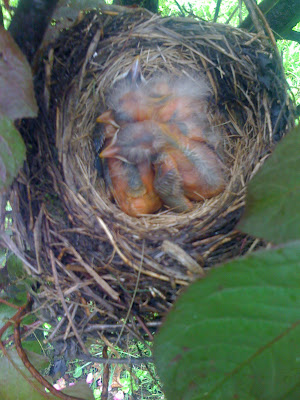 Ok, I decided if the coast was clear, I would attempt to see if the mother bird was around or food hunting. As luck would have it, she was out hunting for food, and I could see a little bit of white fur at the top of the nest from fifteen away, no site of mom anywhere, so I very slowly approached the nest and snapped a few quick shots of the new arrivals! Didn't even know they were there since only a week ago they were still little blue eggs! So, I guess you can say Happy Father's Day! Today was a good day all around. The family spent some time with my dad at the nursing home, he received a lot of nice pajama shorts for his sleepwear, and he is doing well in the new nursing home. Hoping to see him come home after he gets back on his feet so to speak.
Hope you had a nice weekend too. And hope your dad is doing well on Father's Day.
Posted by VIP Studios at 7:55 PM

VIP Studios
I am a strong believer in The Law of Attraction.

I am a professional photographer. Owner of VIP Studios located in Waterbury Connecticut. My photo shoots are detailed to the clients' needs. I certainly love photographing so there are no limitations to the work that I will do. I find every project enjoyable. TFP, Paid Assignments, Private Sessions, Travel, Out of State are all welcome!!! Please inquire.

Also, I am a Professional Videographer. My video acquisition work concentrates on jobs for Law Firms and Corporate video shoots.

Contact me to inquire on how to create a Buzz!

Note: I am currently looking for a female photographers assistant.